Despite its technical and narrative achievements, Fallout 4 lags behind its predecessors in one regard – enemies get repetitive pretty fast, and encounters tend to rely heavily on numbers to keep fights interesting.

After you’ve been prowling the Wasteland long enough, killing enemies starts to become a chore, and little by little you start realizing that you can’t keep playing the same game for years and expect it to surprise you… without mods, that is.

Given it’s been over 200 years since humanity nearly wiped itself out, biodiversity should be through the roof rather than stunted as it looks like in Fallout 4, and since Bethesda didn’t check their science before making the game, it’s up to modders to populate the Commonwealth with new and exciting creatures.

Whether you’re just getting into the game and want an augmented experience from the get-go, or a returning player hoping to experience what mods have to offer in the way of creatures, you’re sure to find something you like here. 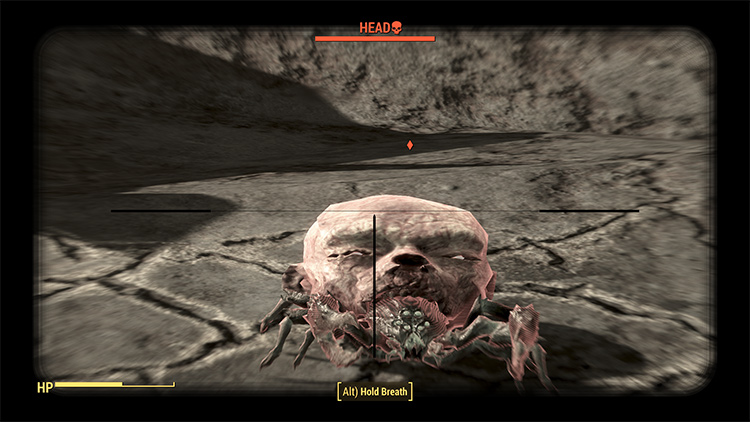 Some mods, you look at and instantly know you’re going to install them.

That’s what I felt when I first saw Absolutely Cursed, a mod that adds an interesting new creature to the Wasteland – the Dead Head.

And then my game was forever cursed.

There isn’t anything quite like combat music kicking in and realizing that you’re up against hermit crabs living inside ghoul heads.

It’s like trying to induce a phobia on yourself for entertainment purposes. 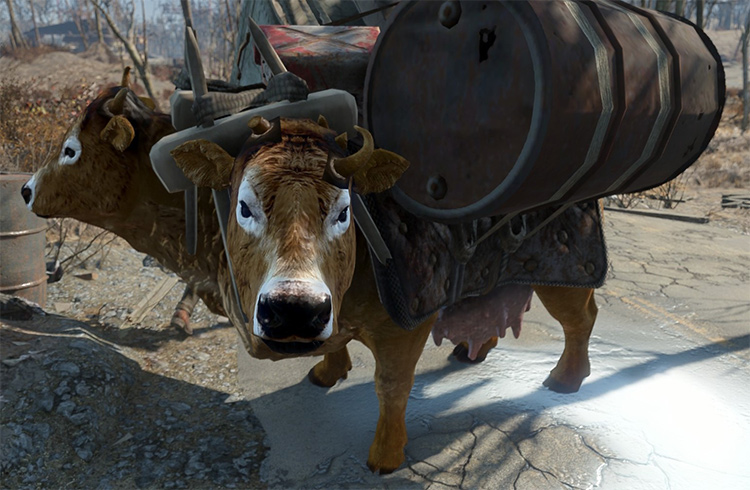 It’s often hard for us animal lovers to play violent games where innocent wildlife may get caught in the middle of our struggle to survive.

Despite being irradiated abominations with two heads, brahmin don’t fail to activate that same caretaker instinct with their cute, absent-minded faces.

Plus I need them to poop so I can make Jet and get high off my mind.

This mod by NexusMods user HerDustIsVeryPretty helps keep your cattle healthy by making unique brahmin immortal. You can now have shootouts in your settlements to your heart’s content without worrying about your walking fertilizer factories. 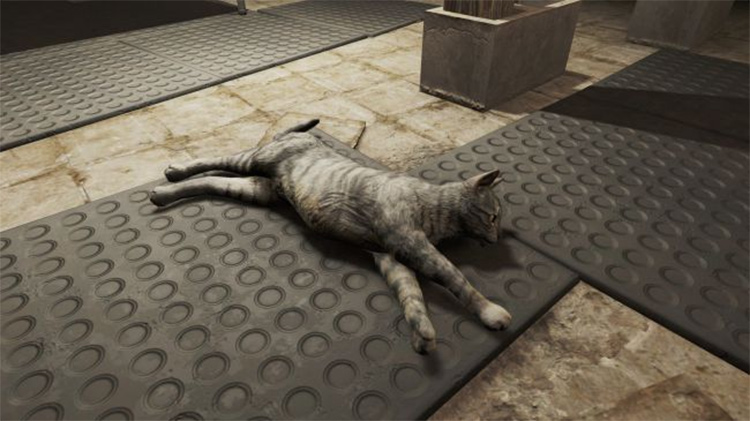 In the same way that brahmin risk being turned into Swiss cheese just by living in your settlements, so do cats often find themselves caught in the line of fire.

But cats are smart, right? Surely they’d be able to avoid the carnage.

Well, modder and fellow cat-lover Greslin was quick to realize that vanilla cats in Fallout 4 are little more than slow-moving targets too stupid to flee or get to cover.

Greslin fixed this by tweaking their behavioral tendencies a bit, making them smarter and avoidant of combat… and just in case, they also have more health. Protect the kitties! 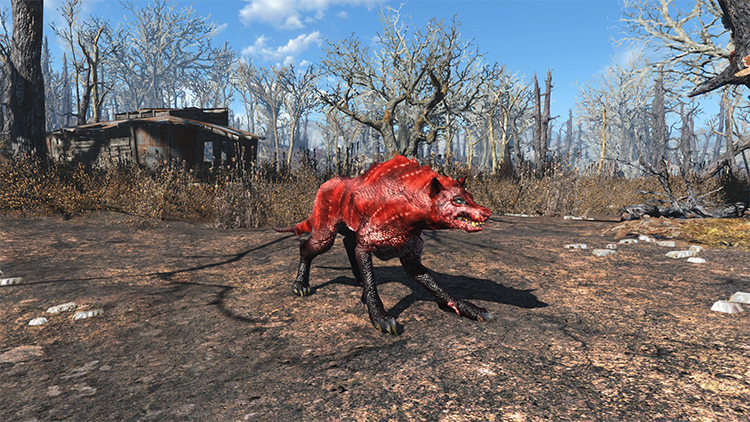 While generally not an issue, Fallout 4 doesn’t quite have the same enemy variety some other open-world games have.

Modder Shadowliger decided that their humble contribution to improving biodiversity in the Commonwealth would be to create the local version of Nightstalkers from Fallout: New Vegas.

They called it the Nightstriker, a poisonous irradiated coyote that can really mean trouble if you’re not on top of your game.

There’s five different variants of the beast, as well as a Nightstriker companion waiting to be discovered somewhere in the Wasteland. 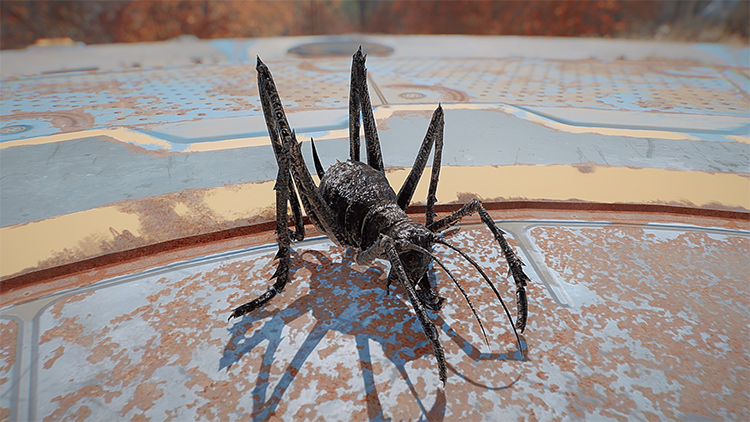 Among the best ways to make an open-world feel alive and realistic is filling it with wildlife just doing its own thing, not necessarily interacting with the player.

This can be resource-heavy, so, understandably, Fallout 4 developers didn’t put much emphasis on this detail.

Since nowadays most gaming PCs can run the game perfectly, modder Giggilymoeromicon thought it was high time the Wasteland was repopulated, so they added several spawn points all over the Commonwealth for small passive animals to do just that. 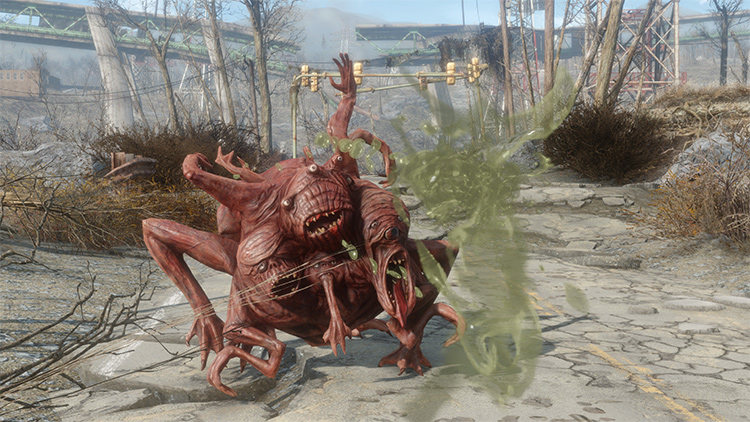 Bethesda had many creatures planned for Fallout 4 that never really made it into the game.

Among them were the Institute Centaurs, which have nothing to do with what you’re thinking about when you hear the word “centaur”.

Modder TheFriedTurkey, along with their team, decided to bring this scrapped content back from the trashcan, making new models, textures, and animations to bring it to life.

The result is a horribly deformed, badly spliced abomination that looks just like the one in Fallout 4’s concept art. Charming. 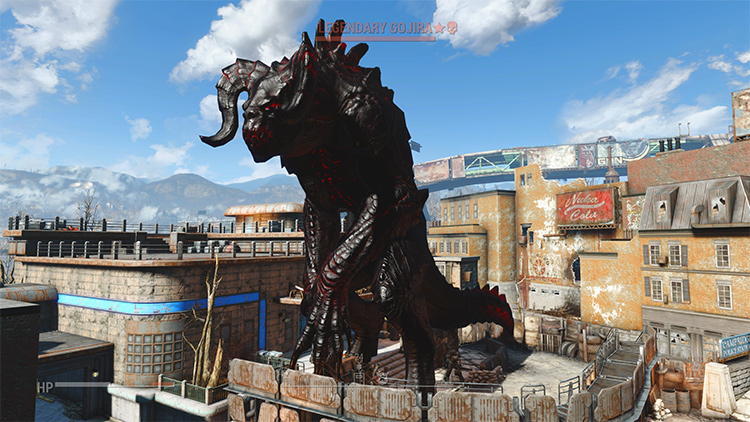 If you want to add a new formidable enemy but aren’t quite fond of the “Please kill me now” vibe the Institute Centaurs give off, perhaps you should consider introducing some kaiju goodness into your Wasteland.

This mod by creator Neeher adds a new Legendary Deathclaw named after the Japanese version of Godzilla – Gojira.

This name makes more sense once you see its size, which is seven times that of a regular deathclaw.

This towering beast presents a serious challenge to anyone not armed with a Fat Man or something of the sort, and the way it randomly spawns at any point while exploring the Wasteland makes it feel just like being attacked by a dragon in Skyrim. 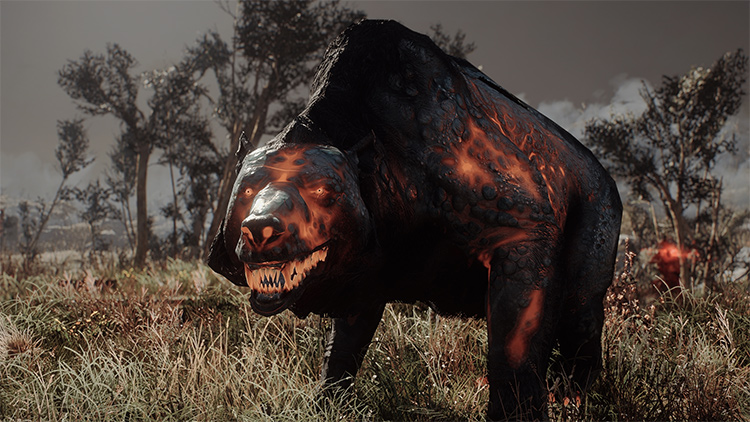 These orange-glowing horrors are what happens when a regular glowing variant comes into contact with a municipal plutonium well, becoming even stronger.

There are currently 20 plutonium creatures, and while they’re effectively OP when compared to their normal counterparts, they also won’t start spawning until several levels later.

This way they’ll be a challenge without completely breaking your game. 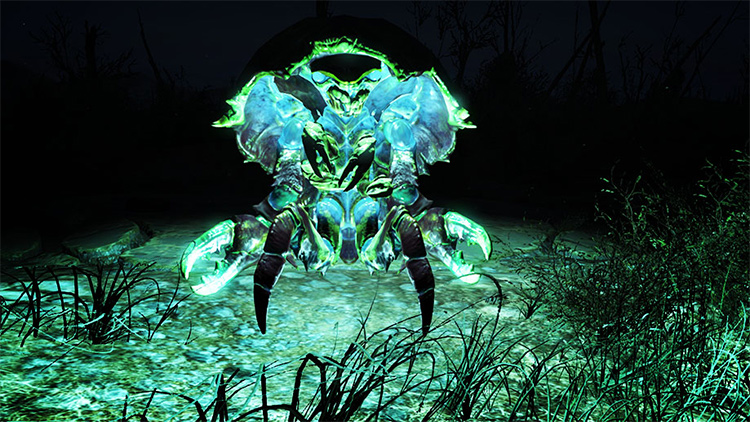 A perfect companion mod for Plutonium Creatures is Glowing Animals Emit Light by MM137, an add-on that turns glowing variants of creatures into light sources, as they should always have been.

This will make fighting strong enemies in the darkness a much more immersive experience, albeit a somewhat easier one as well.

Getting mauled at midnight by a radioactive Yao Guai had never looked this cool. 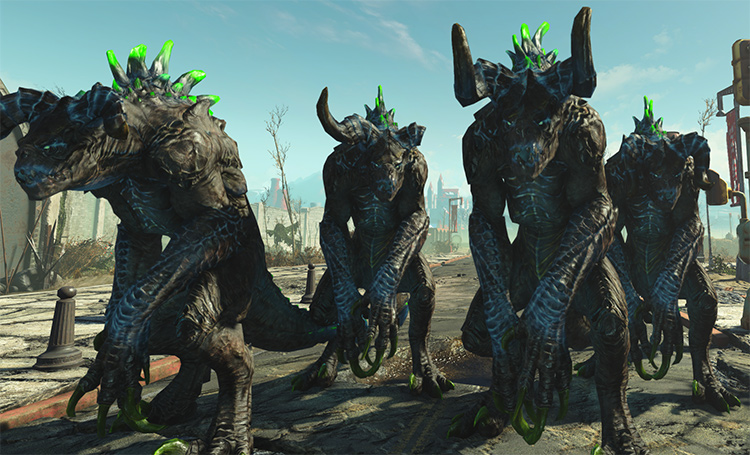 Deathclaws have always been beautiful killing machines that never fail to rip me to shreds when I get distracted admiring the spiky beauty of their being.

Modder Hopper31 apparently agrees, so they decided to add over 20 new varieties of deathclaw into the game – all using only vanilla assets.

Red Deathclaws, Glowing Deathclaws, and even Albino Deathclaws may now come out at any moment to separate you from your limbs in style – and you’ll be thankful for the spectacle. 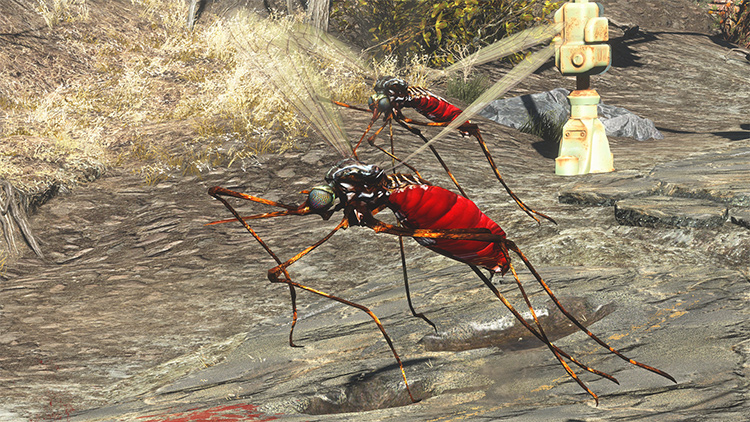 Of course, there’s no point in upgrading deathclaws if you’re going to leave everything else the same.

Instead of adding more variety, modder Xazomn decided to upgrade the textures of every creature in the Wasteland so they look more detailed and, in consequence, lifelike.

Gone are the days of playdoh models of radioactive dogs with shiny, beady eyes trying to kill you.

Now you can get disemboweled by a pack of abominations without breaking your immersion. 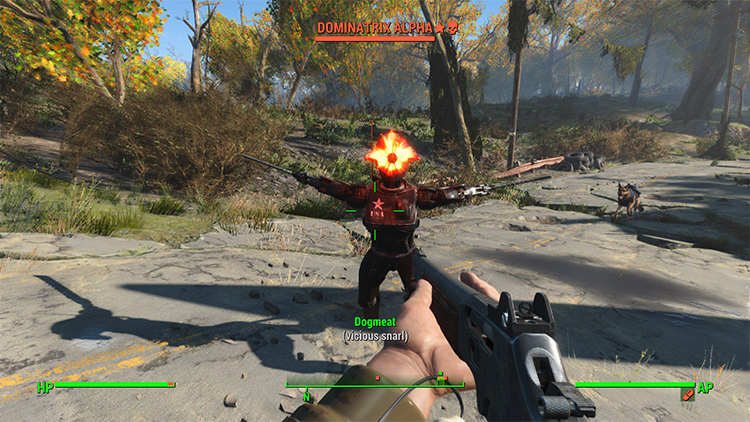 Are you tired of “legendary” enemies having boring, run-of-the-mill names like “Legendary Thingamabob” instead of something special?

Modder Pwnstar fixes that by giving each and every Legendary enemy in the Wasteland either an epic, intimidating name or something a little more lighthearted. 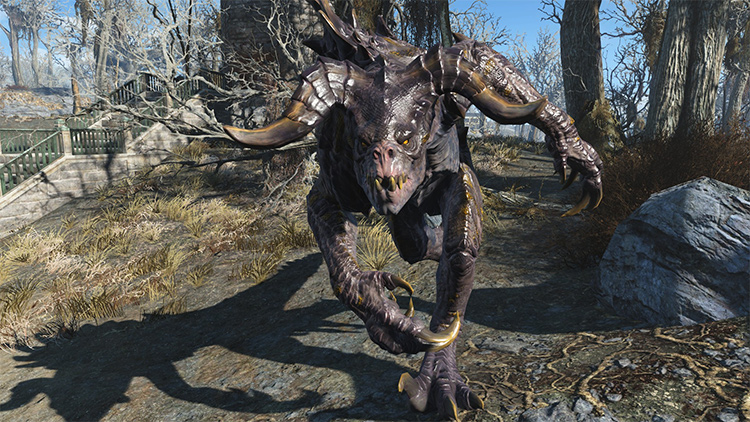 Deathclaws look terrifying and are fittingly strong as hell when you first encounter them in the Commonwealth, but once you get the hang of things, such events become underwhelming.

Creator Mpankey decided to fix this by buffing these Dragons of The Wasteland considerably – as well as adding stronger varieties such as the Quantum Deathclaws that were cut from the Nuka World DLC.

If you want to test out just how much stronger they are, head to the hills west of the Glowing Sea, where you’ll find a cave overrun with deathclaws that’s appropriately called The Devil’s Den. 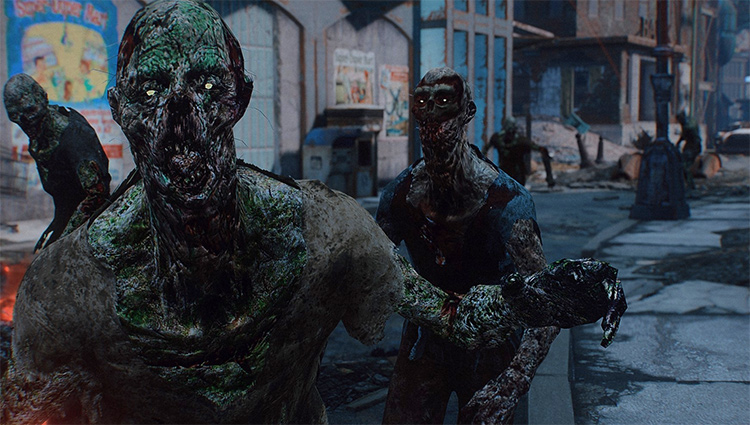 Among the most common enemies in Fallout 4 are feral ghouls, former humans turned into quasi-immortal mindless shells, gone crazy due to hunger and suffering.

With such a horrible backstory, it’s kind of underwhelming just how leathery and old they look.

To fix this, modder Thumblesteen replaced their textures and models with something reflecting decay rather than mummification. 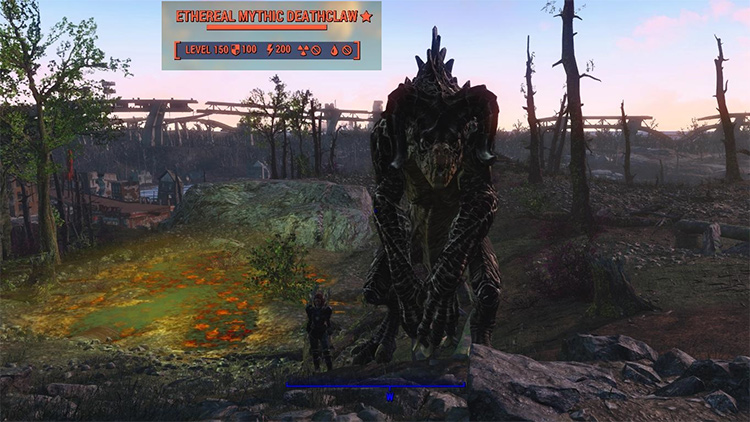 After playing the game several times and experiencing the godly powers of maxed-out characters, most of us start finding the vanilla creatures and bosses increasingly boring.

To keep things spicy for seasoned players, modder Charrisx decided to place many respawnable Legendary creatures hidden throughout the Commonwealth so that there’s never a dull moment in your adventure.

This mod adds 27 unique bosses, including a bunch of giant abominations that’ll make you feel as if you’re playing Monster Hunter World.

Nelson Chitty is a Venezuelan expat living in Argentina. He’s a writer and translator passionate about history and foreign cultures. His ideal weekend is spent between leisurely games of Civilization VI and looking for the next seinen anime to marathon.

A mod that adds a new species of enemy to the Commonwealth called A Nightstriker based loosely off the Nightstalkers of Fallout: New Vegas.

This author has not provided any additional notes regarding file permissions

This author has not credited anyone else in this file

This mod is opted-in to receive Donation Points

Translations available on the Nexus

[*] All Variants of Nightstikers (minus Pups) now have «Nightstealth» meaning they will cloak in low light conditions. Use Pip-boy/other light source to reveal them. Legendary variants stealth mutation is unaffected by this. (Thanks Zzyxzz for the idea and implementation of this)

[*] Added new variant, Nightstriker Pups. Pups are weaker then adults, do not ever cloak and are not instantly hostile though they will attack if they see you or a companion attack another Nightstriker in the same area.

[*] Fixed the bug with scrapping mods in Sanctuary

This mod’s NOT dead! Yay!

Update to Nightstrikers (Version 3.1): Now that Borous has finally been fixed to being a good boy I figured it was time for a sound overhaul. Sound changes made :

— Enemy Nightstriker encounter sound has been completely replaced. I felt that the original one was too loud and rather obnoxious. The new one is softer, deeper and (IMHO) more menacing. Yes the hissing, and tail rattling sounds are still present in the sound, just not as «In your face» as they were before.

﻿— Borous also has a brand new ambient sound (his breathing sound). Discovered that having him travel as a companion that he was really loud and his sound was short, repetitive and really sounded «fake». Replaced it with a much deeper (and much quieter) ambient sound. Also changed Borous to use the same footstep sound files as Dogmeat, as people said that he «walked too loud».

If issues arise due your failure to follow the above instructions I cannot help you.

This mod came about as a result of two things:

This mod REQUIRES the Far Harbor DLC, it WILL NOT function without it and will likely crash your game. Any requests to remove this requirement will be completely ignored as mod uses assets from that DLC.

Download with NMM or Mod Manger of your choice. If you want to manually install it I assume you already know how to do this.

Use NMM preferably, or open Fallout 4 Data folder, go into Meshes, Textures, Materials, Sound->Voice/FX, Scripts and delete all folders with Nightstriker in the name.

What this mod includes/does (long description):

01. Introduces a new species of creature to the Commonwealth called Nightstrikers spiritually based on the Nightstalkers of Fallout New Vegas (they have their own leveled list and around 15 spawn areas, with at least 2-3 Nightstrikers spawning at each area)

02. Nightstrikers come in 5 variants ,each with its own unique texture and abilities

06. New unmarked location (an abandon shack with a basement)