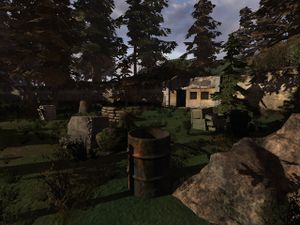 There is a location called Polygon (internally known as Arena) mentioned in the game sound files. It was a test location originally intended to show how smart covers — the system where NPCs could hide behind an obstacles playing a special animation, making combat in CS more cinematographic and entertaining — work.

It is either located somewhere near Dark Valley, or planned as a part of it. The location was also further meant to transform into a Freedom mini-game, similar to a Duty one, but got cut for some reason. Possibly because moving players to another location just for a mini-game was too resource/time-intensive, and developers had no time to move Polygon to Dark Valley, or because Freedom capturing different faction members to fight at Polygon made little sense.

The mini-game itself is pretty simpleː you fight different groups of enemies through five rounds, with each one being more difficult than the other. Once you kill everyone in the current round, a timer starts while Scar has time to collect enemies’ loot, heal wounds and look for comfortable positions for further shooting.

Neither the location itself, nor any scripts for it are leftover in any pre-release builds or the final game, but they got leaked with other source material in 2012.

Before every round you’d hear an announcer telling you what you’re facing next. These untranslated, unsubtitled announcer voice-overs are all that remain.

Welcome to tactical polygonǃ Here you will be able to test your combat training in conditions as close as possible to real life. You have yet to complete a number of combat assignments. You are going to get all the necessary information via PDA. Before each battle you’ll be given a starter kit. Besides, you can pick up weapons and ammunition from fallen enemies. Good luck, Stalkerǃ

You are facing two stalkers. Be careful and they won’t be a problem.

You have to eliminate a squad of bandits. Better avoid full-frontal attack and approach from the rear.

You are facing a military squad. They’re well equipped, so be extremely careful.

Your goal is to eliminate a mercenary camp. They’ve holed up in a well fortified position, so you have to be creative.

Your last mission is to resist Monolith’s pressure. There will be more opponents than you can imagine. Use area wisely, don’t forget about grenades and you will be able to win.

Congratulations, you win. Inform as soon as you will be ready for the next challenge.

Bravo, you’ve completed all the challengesǃ