In 1986, the world’s worst nuclear disaster occurred at the Chernobyl power station. Soviet authorities established a 30km ‘Exclusion Zone’ around this nuclear wasteland, but in 2006 a second explosion rocked the stricken reactor, obliterating all living things and causing the Zone’s boundaries to ripple outwards. From this epicenter came waves of mutated creatures, deadly radiation, and a strange, anomalous energy. The Zone was cordoned off by the military, who would shoot on sight anyone foolish enough to brave the horrors within. 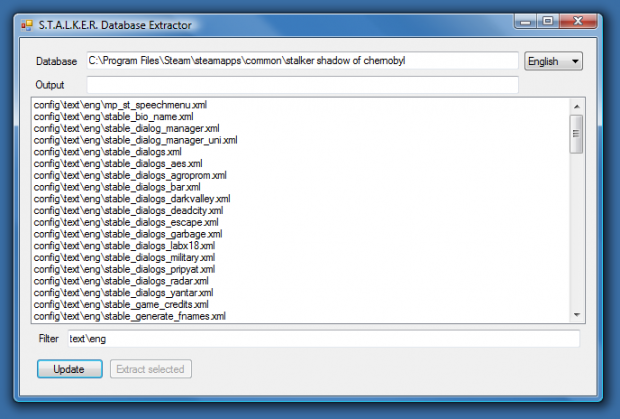 but theres some problems

i have to put in the command line, this needs a browse button
C:Program FilesTHQS.T.A.L.K.E.R. — Shadow of Chernobyl

It has auto-complete, though. In my experience, this is much more efficient than browsing.

For whatever reason this wont work on my PC.

I keep getting the same error: failed to initialize application

you run it from the rar dont extract it

Doesn’t work for me either.

Does nothing when you hit extract selected (single or multiple items)

1) The database you want to extract has to be ouside of Steam Folder (Maybe just the depth of the path is important. I don’t know. )
2) The Output destination you select MUST exist
3) You can mark everithing you want to extract, with Mouse Button and then with the Shift key and the second Mouse klick, you mark all files you want.

Used for *.ltx files no problem at all. You can use to any folder only needs to input the folder you have copy the databases and also the output folder. For extract *.ltx files need at filter to write ltx. Also creates and the folders which is inside the file config. . . ltx, but not the output folder, this must be exist as already informed from other user. Thx 4 this

Does it work for other mods or mod packs such as STALKERSOUP? I just want the damn door code to get into the secret lab in Limanskaya.

It auto completes filling the header with correct directory but then does not show the contents of any .db file in the directory. We need something that does what this claims to. We really do but this is not it. I have had this for a long time. Just downloaded it again by mistake. I need a couple files out of Clear Sky resources .dbo’db1’db2 and none of the 4 extractors I have work. Even AXR Toolset fails to do it. Says it did it, completed, no errors. then the output folder is still empty. Anyone have a link to a Stalker .db extractor that works?

Same problem with Anomaly and Dead Air, very annoying. Let me know if you find anything useful

Take a look at this link, you will find what you are looking for